2014 REPORT: The Relationships Between School Poverty and Student Achievement in Maine


A new 2014 report, "The Relationships Between School Poverty and Student Achievement in Maine", has been published by the, Center for Education Policy, Applied Research, and Evaluation at the University of Southern Maine.

Executive Summary
The goal of this study was to examine the relationships between school level poverty found in Maine schools and student academic performance. The evidence clearly shows that there is a relationship. As the percent of poverty increases in a school, student performance declines. But the poverty level alone does not explain the wide variations in performance found across the state. The level of poverty in a school is the single best predictor of average student performance, but other factors also play a role in influencing student achievement. Some of these factors include the type of school students are enrolled in, years of teaching experience of the school staff, and the education levels of teachers. Evidence was also found for some higher poverty schools that were defying the odds. Even with higher levels of poverty in their schools, these schools were successful in producing higher levels of student performance.
The 40-page full report is available for free PDF download, here.
﻿
Some Maine Media coverage:
PORTLAND PRESS HERALD, January 10, 2014
Poverty impacts Maine students’ grades, researchers say
BANGOR DAILY NEWS, January 10, 2014
Report: Maine schools with higher percentage of poor students typically have lower academic performance
﻿
Posted by Maine Poverty at 12:38 PM No comments:

MAINE CALLING: What Does It Mean to be Poor?

On November 21, 2012, MPBN Radio call-in show, "Maine Calling", aired a show entitled, "What Does It Mean to be Poor?".  It was a good conversation with guests from Preble Street Resource Center, Garrett Martin, Executive Director, Maine Center for Economic Policy, and some excellent callers.

PLEASE NOTE:  the content below was shamelessly grabbed off the MPBN site - including the Dickensian, "please, sir, may I have some more?" photo which only serves to reinforce stereotypes about poor people, but, hey, no worries, MPBN!  ...everyone does it and you done good by giving visibility to a chronically invisible issue suffered by hundreds of thousands of invisible Mainers & tens of millions of invisible Americans.  For this and all that you do 24/7/365, "come rain, snow, sleet, or dark of night", MPBN, we love you!  & thanks!

Posted by Maine Poverty at 6:43 PM No comments:

Bill Nemitz: Finally, it's a purpose both sides agree on The Portland Press Herald / Maine Sunday Telegram
Posted by Maine Poverty at 8:21 AM No comments:

...promoting the rights of Mainers - ALL MAINERS - under the Universal Declaration of Human Rights.
First adopted in 1948, Eleanor Roosevelt called it her greatest achievement. 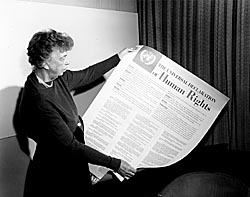 ﻿
Eleanor Roosevelt
"Where, after all, do universal human rights begin? In small places, close to home - so close and so small that they cannot be seen on any maps of the world. Yet they are the world of the individual person; the neighborhood he lives in; the school or college he attends; the factory, farm, or office where he works. Such are the places where every man, woman, and child seeks equal justice, equal opportunity, equal dignity without discrimination. Unless these rights have meaning there, they have little meaning anywhere. Without concerted citizen action to uphold them close to home, we shall look in vain for progress in the larger world."
Eleanor Roosevelt
The Universal Declaration of Human Rights (UDHR) turned 60 on December 10, 2008. On Human Rights Day 2007, the United Nations Secretary General launched a year-long UN system-wide advocacy campaign to mark this important milestone. The initiative celebrates the Declaration and the promise that has made this document so enduring: “Dignity and justice for all of us”.

Excerpt from FDR's January 11, 1944 State of the Union Message to Congress enumerating a Second Bill of Rights:
We have come to a clear realization of the fact that true individual freedom cannot exist without economic security and independence. Necessitous men are not free men. People who are hungry and out of a job are the stuff of which dictatorships are made.

In our day these economic truths have become accepted as self-evident. We have accepted, so to speak, a second Bill of Rights under which a new basis of security and prosperity can be established for all – regardless of station, race, or creed. Among these are:
All of these rights spell security. And after this war is won we must be prepared to move forward, in the implementation of these rights, to new goals of human happiness and well-being.
America's own rightful place in the world depends in large part upon how fully these and similar rights have been carried into practice for our citizens. For unless there is security here at home there cannot be lasting peace in the world.
Complete text available at The American Presidency Project at UC Santa Barbara.

Roosevelt's January 11 address was delivered via radio, due to the President's illness at the time. During the last portion dealing with the Second Bill of Rights, he asked news cameras to come in and begin filming for later broadcast. This footage was believed lost until it was uncovered in 2008 in South Carolina by Michael Moore while researching for the film Capitalism: A Love Story.

The footage shows Roosevelt's Second Bill of Rights address in its entirety, as well as a shot of the Five Rights printed on a sheet of paper.[2]
Posted by Maine Poverty at 7:23 AM No comments:

I am trying to help Jan Lightfoot end her hunger strike by telling you that the story of hunger needs to be brought in front of the American people. HUNGER must not be buried in USA Today's backpages, on the rare occasions it is covered at all.

Jan LightfootLane of Fairfield is now on a 30 day hunger strike (begun in late July) to make the media aware of the plight of those victims of rising hunger and homelessness. She is asking that people write an email to USA Today to let them know that she (Jan) is on the hunger strike and to have USA Today cover the problem of hunger in major stories. If 500 people e-mail paper (USA Today) Jan will suspend her hunger strike.
To help Jan, please e-mail accuracy@usatoday.com and tell them you are aware of Jan's hunger strike and that the story of hunger needs to be brought in front of the American people. It should not be a bottom of page 42 news story. Please send a copy of emails to USA Today to Jan at janshouse@yahoo.com. You can also contact her at that email if you have questions or want to support her in other ways.

Larry Dansinger via Pete Sirois and Jan
--
You received this message because you are subscribed to the Google Groups "Mainers Rights" group.
To post to this group, send email to mainersrights@googlegroups.com.
To unsubscribe from this group, send email to mainersrights+unsubscribe@googlegroups.com.
For more options, visit this group at http://groups.google.com/group/mainersrights?hl=en.
From: Larry Dansinger
Posted by Maine Poverty at 3:36 PM No comments:

Donaldson: Altruistic behavior can mean a more fulfilling life for all The Portland Press Herald / Maine Sunday Telegram
Posted by Maine Poverty at 12:48 PM No comments: